Get to know our Speakers

THE MEDICAL SCHOOL OF THE FUTURE: ENSURING QUALITY

The annual conference of the Association of Medical Schools in Europe was held on October 6-8, in Adjara, at the “Litz Resort” hotel (Batumi, Kvariati). The 2022 edition of the conference was hosted by Davit Tvildian Medical University, taking it beyond Europe for the first time. The event was attended by European and international institutions important for the development of the field, including WFME (World Federation for Medical Education), EUA-CDE (European University Association – Council for Doctoral Education), ORPHEUS (The Organization for PhD Education in Biomedicine and Health Sciences in the European System), IFMSA (International Federation of Medical Students’ Associations) and others.

Among the speakers were internationally recognized experts and leaders in the field of undergraduate and postgraduate medical education, wider PhD education and health in general:

John Creemers – President of the Organization for Doctoral Education in Biomedicine and Health Sciences in the European System, Professor KU Leuven, Belgium;

Daniel Dirul – Regional Director for the European Region of the International Federation of Medical Students’ Associations.

Other speakers representated institutions from Ukraine, Hungary and Lithuania, as well as over ten Georgian organizations.

The event was recognized as a great success and found to be contributing to development of medical schools in the European region as well as enhancement of quality of education provided by these schools. A consensus paper was agreed and will be circulated among the AMSE members.

At the end of the event, Gala dinner was held accompanied by traditional Georgian folk songs.

We would like to welcome you to AMSE 2022 Conference, an annual conference held by the Association of Medical Schools in Europe (AMSE) and this year hosted by David Tvildiani Medical University, Georgia.

Ensuring quality in the medical school of the future is the main theme of the AMSE 2022 Conference. The majority of medical schools in Europe, as well as worldwide, have been finding themselves in a period of ongoing major crisis. The challenges relate to the COVID-19 pandemic, military conflicts and the consequences of the climate change create a very uncertain future.

The AMSE 2022 conference will be the opportunity for the leaders of AMSE member schools and other key organizations to come together to reflect on their present situation and how, through the debate that ensures quality in all schools, they can actively shape the future of medical education, research and patient care.  Deans, leaders, educators and researchers are invited to participate and to contribute to the debate, drawn from a wide range of perspectives and through the lens of quality assurance.

AMSE was founded in 1979 as an Association of Medical Deans. Since its inception, AMSE has served as a platform to develop, promote and facilitate the co-operation between medical schools in the WHO-Europe region; enhancing quality has always been one of AMSE´s main overarching goals.

The AMSE 2022 conference will be hosted by the David Tvildiani Medical University and will take place in Kvariati, Georgia, during the period from October 6th until October 8th. This year it will be held through a hybrid format, allowing both face-to-face and online participation.

A central and important element with the conference will be the AMSE´s General Assembly, during which all attendees will hear how AMSE is functioning at the moment, and most importantly, its plans for the future.

AMSE was conceived on a boat trip to Epidaurus in 1979. Kvariati is a seaside location, so one may say that the AMSE returns to its birthplace – on the sea.

Looking forward to meeting you in Kvariati in October, 2022 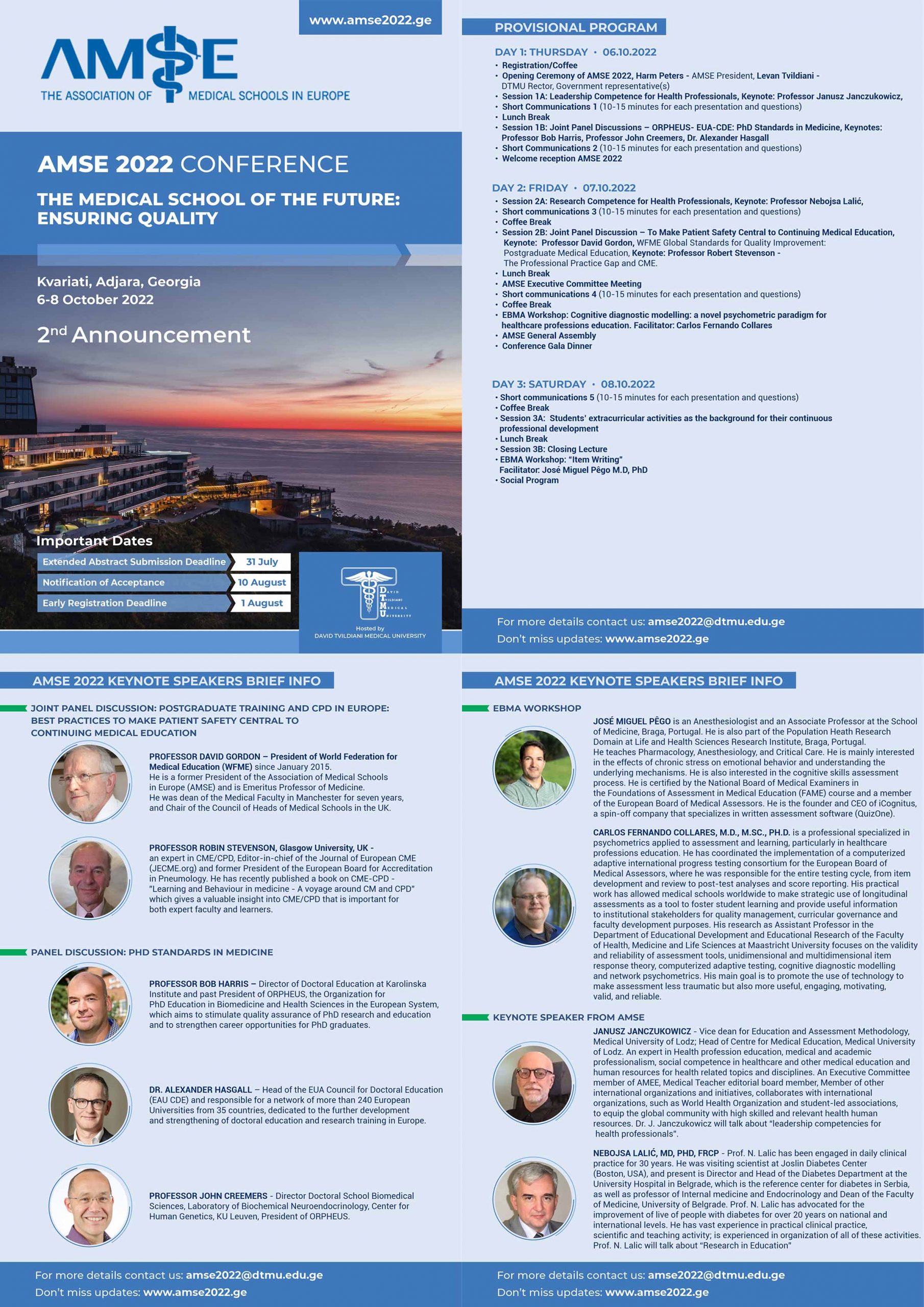 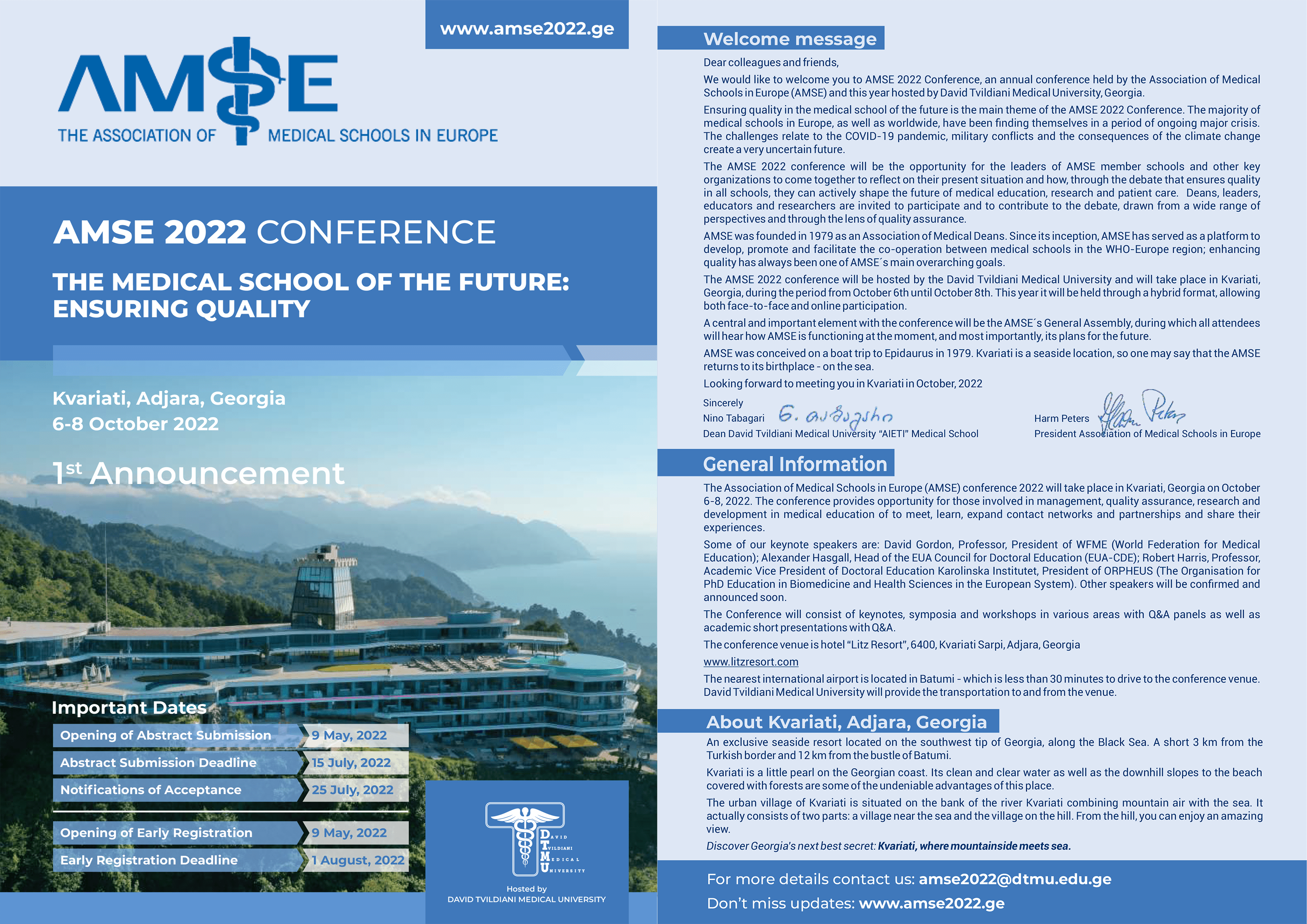